The uber private world of yachting and private aviation is chock-full of hazards and faux pas inducing decisions. It is therefore a journey that mustn’t be made without the expert advice and knowledge of someone like Patrick Knowles. As a renowned designer of some of the most luxurious yachts and private aircraft in the world today, he can surely guide anyone looking to make a splash onto the scene. Replete with decades of experience, handling all aspects of considerations from the most discerning of clients, Patrick has what it takes to make you the toast of the town. To give you an idea of what is to come, Patrick discusses what has come before. So sit back, relax and read his retrospective of design. 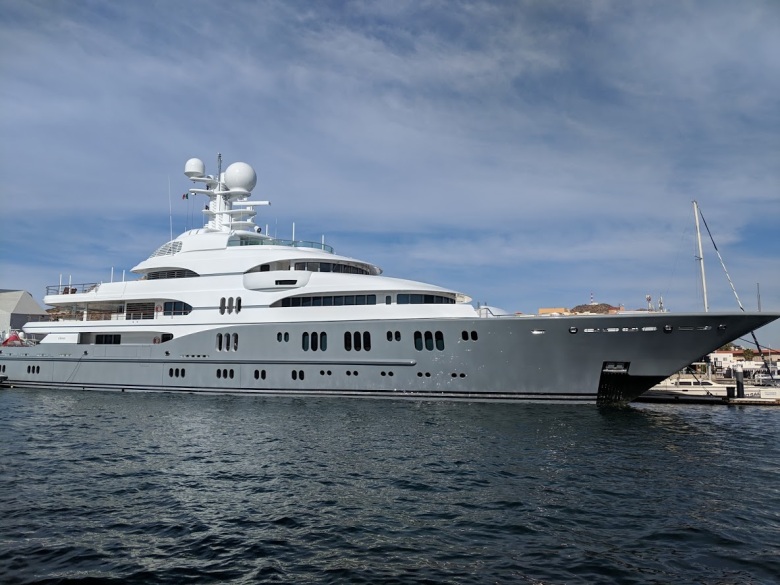 When working with a client accustomed to the best, it is imperative that designers keep up with the latest and greatest, particularly in luxury industries with their own set of style rules, like the world of yachting. Internationally known, award winning yacht designer Patrick Knowles has watched the marine world change from where his interests began in the 70’s, to a look ahead into design in 2020, and here he takes us on a journey of 50 years through yacht design. Flip through to see how the style of decor has changed, while finding inspiration from years past. As Yves Saint Laurent says, “Fashions fade, style is eternal.”

There were two main styles in the early 1970’s.

The first had a South Florida, Palm Beach flair with a Lily Pulitzer feel, heavy on rattan and old Key West “Hemingway-style” furnishings. Enclosed aft decks were extremely popular, the yachting version of the “veranda” or “screened porch” and it was often used for pre-meal snacks or cocktails. 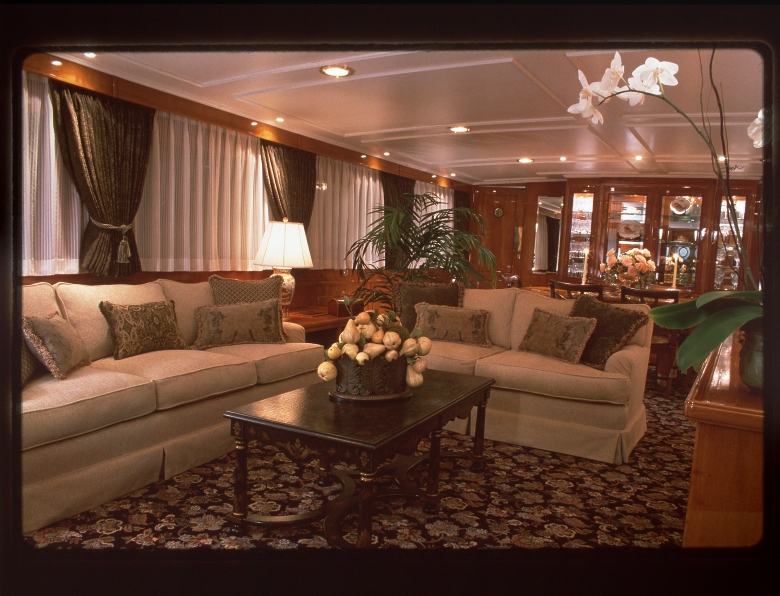 Full wood paneled rooms were the rage by the late 1970’s as a yacht was not a yacht without an abundance of teak…Burmese Teak no doubt, the best one can acquire; and having lots of it spoke words about the owner’s means without having to utter a word! Wood shutters in the same species of the bulkheads and cabinetry was also an identifying mark of this era. Peridot carpeting, drapes, tassels and sheers again confirms the style and sensibility one would conjure up when dreaming of a classic, traditional Y-A-C-H-T! 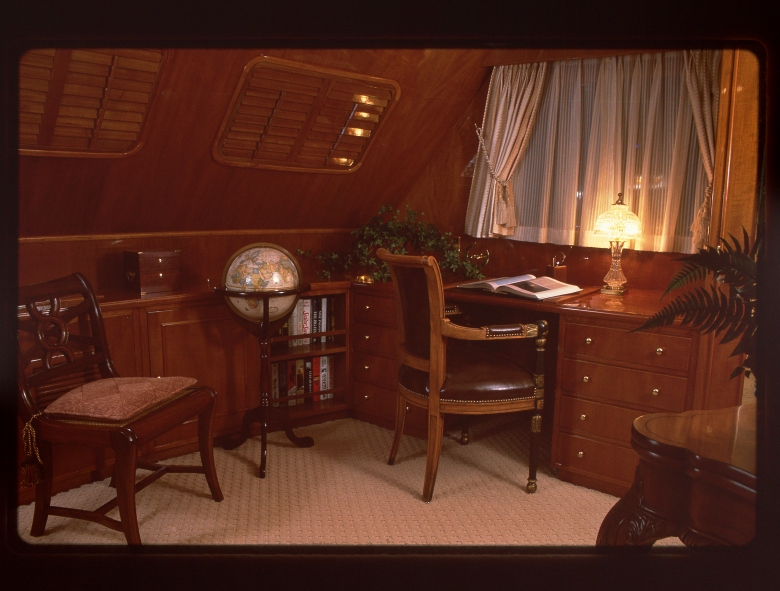 The yacht world did a turn in the 80’s, with a focus on travel as opposed to luxury. The yacht became a vessel in which to disconnect and forget about life on land. Miami Vice was top of the ratings…..and EVERYTHING followed its trend setting path, including yacht decor. Peach, turquoise, mirrors and leather dominated and pearlized lacquered finishes in all shades of pastel was truly the rage. 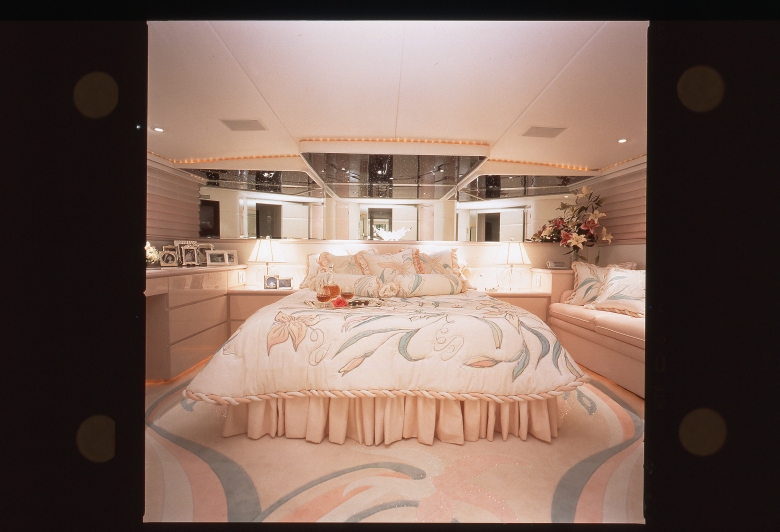 Futuristic and Galactic themes were in many aspects of design in the 1980’s. In this image, affectionately called the Galactic Lounge, featured lots of mirror, glass and lacquer and was a request of the client’s. Miles of fiber optics were laced through the design to create the galaxy effect in the overhead panels,and in the reveals of the soffit and cabinetry. A handwoven celestial carpet of premier silk and wool also combined with fiber optics to create a continuous display of movement and animation. The roaring 80’s at its best! The 90’s was modern, it was hip; it was smart, not too contemporary, with an ironic nod to the past. Intricate designs seemed to fall out of fashion, as minimalist sensibilities took over. Monochromatic understated backgrounds set the stage for monolithic statement pieces. Soft furnishings began to transform into more contemporary pieces while keeping traditional silhouettes, a safe place where one could be modern without being disloyal to tradition and heritage.

Metals became a hallmark of 90’s yacht design, integrated in decor and in appliances, technology and splashes of metallics in textiles as well. Similarly to the 80’s mirrors were used extensively in the 90’s, but this time they were not used to maximize the look of the room, but rather as an understated accessory used to underscore and lighten the space.

Ah, the 2000’s – every industry changed, Y2K proved to be no more than a hoax, and with that, we were in a new millennia. This meant everything had to change and that included EVERYTHING about yacht decor. For the first time in the 2000’s we were talking about sustainability in materials and capabilities in smart technology. In decor, austere, serene and monochrome designs took center stage.  The spa mentality that is prevalent in yachting today began in the 2000’s. Crisp linens, soft bed frames, upholstered (non-padded) bulkheads and a distinct lack of accessories and accents induced a calm that comes about only when the mind is pardoned from having to digest all the exuberant clutter that was popular in the preceding decades.

One of the popular trends of the early 2000’s , which still has merit in today’s design was the use of a muted palette with accent colors so close to muted it became difficult to discern which was foundation and which is accent. Organic elements became important as well, for example the organic “fire flame” wall sconces and the tailored fresh floral arrangements.

At the start of 2010, the new millennia feeling had worn off. This was when the yacht industry truly embraced it’s beautiful history. By using the class of the 70’s, the playfulness of the 80’s, the crisp look of the 90’s, and the free spirit of the 2000’s; we entered a new world of complete harmony and gorgeously balanced design.

Paneled overheads (harking back to the establishment of the 70’s) resurface in satin wood finishes, upholstered leather panels as well as coarse linen textiles. It gives that depth of heritage…but in a new way! The bulkheads are soft with textiles, but this time around they are padded; plus they have a companion….wood inlays. A marrying of the 2 popular genres of the past. The soft furnishings are streamlined, uncluttered and void of detail, the cabinetry is strong, monolithic and commanding, while the accents are bold, but minimal. The feel is in the order of a spa….but yet not snoozy! 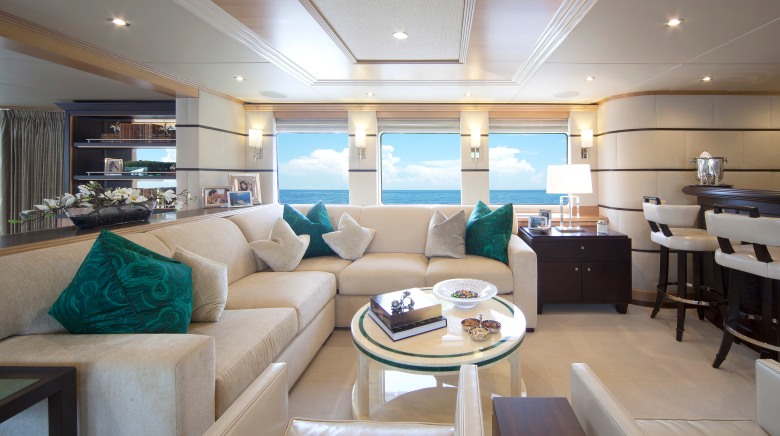 Unlike the onset of the style shown of the 1970’2 image of the aft deck, the deck experience and design expectations are polar opposite.Clients now look for clean lined teak furnishings. Natural wood and metal finishes are popular, but notice the metal accent of the furniture is bronze…whereas the reflective finish of yachting grade polished stainless steel is reserved for handrails, reaffirming your presence aboard a luxury yacht. the 2010’s officially mapped its own course.

The End of a Decade…

Today in 2019, much is borrowed from the years past, shaken together, hurled with great exertion into a new, bright and clean expression of design. Warm wood, traditional sapele mahogany no doubt, juxtaposed with contemporary and very dark wenge species of wood is popular. Light fixtures range from sleek hidden insets to glamorous mood-setting Hollywood-esque chandeliers, and serious furnishings and fabrics combined with whimsical patterns and textures as seen in the image below. 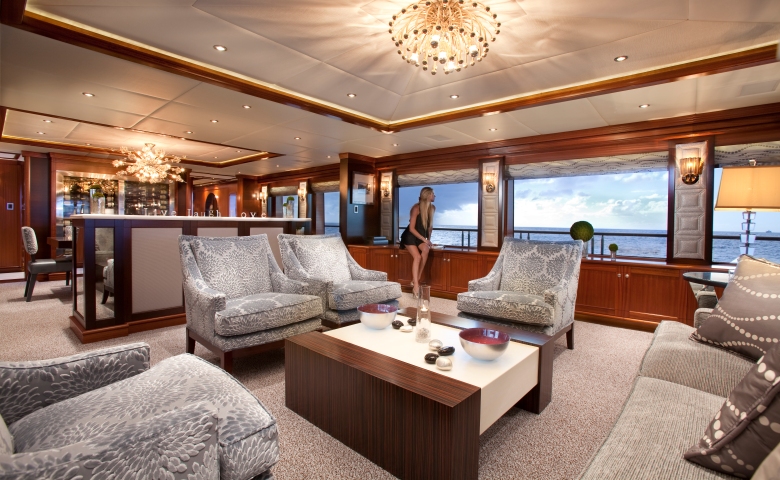 This last image, a private aircraft I worked on,  is the ultimate expression of current design NOW. Natural light is key in luxury design on land, in the sky or on the sea, and in this aircraft, there are not only oversized windows amidships, but there is a unique band of skylights wrapping the central portion of the fuselage at mid cabin. While the aircraft’s interior is bright white, the contrasting punctuations of ebony wood takes the large space and breaks it into bite size pieces for the visual senses. The cabin is cleverly segregated to define the space’s various functions by employing dark rings instead of bulkheads, with simplified, sleek joinery wood full of character and presence.

Technology will continue to shape design. Sustainability and availability of materials becomes a center topic of conversation as well. Overall I think the biggest change is the owners themselves. As we progress into the future of yachting with a new generations of owners (many of whom are younger than we’ve ever designed for in the past), those who now arrive into our industry will challenge us from a perspective that only they can. They are of the individuals who have never flipped through the pages of a book or a magazine but who are avid Pinterest and Instagram enthusiasts, those who have close relationships with online friends whose voice they’ve never heard, all made possible by means of technologies that have formed their lives from the moment of their arrival. This gives them a sense, a perspective that we can not even imagine.

With that said, as one who has flipped through the pages of books and of magazines, and who has established my closest relationships based on the interaction of voice, I await with great anticipation what this new generation of owners will bring to the table. The excitement for me is to simply experience it and live it in the moment as it unfurls! Already I am finding myself creating spaces I would never have dreamed possible at the beginning of my career, and the marine world is ready for what is to come.