Who would have thought, even 10 years ago, that SUVs would be such a massive market. With just about every single car maker now in the business of providing SUVs in their lineup, the world is full of lumbering vehicles. Most SUVs, are large and laboring behemoths that clog roads and guzzle gas, hardly the ideal situation portrayed in splashy adverts. Yes, the technology and materials used in these cars has gotten better, but most are still just big and frankly, ugly. Having been in the SUV game for a long while now, Chevrolet was committed to creating an all new Blazer that was worlds away from the current crop of cars.  And first on the list that needed changing was styling. Suffice to say, Chevy knocked it out of the ballpark with the Blazer!

Now I have never driven a Blazer before the other week. To me, in my mind, the Blazer was a tried and true SUV that hearkened back to the days of big and ugly, gas mileage not withstanding. The Blazer was a relic from a time long since past, when car makers slapped together a somewhat looking car onto a truck chassis. Upon arriving at the event for the new Blazer, all my previous notions of SUVs was gone. I was at once smitten with the vehicle. Its sharp lines and thoughtful creases had me wanting more. In fact, upon first viewing the Blazer, I thought that it was only a prototype, as such strikingly handsome styling cues surely couldn’t be put into production. But alas, I was wrong again, and in fact, what you see is what you get. And what you get is sexy!!!

Boasting an entirely otherworldly design, Chevy has made the Blazer into a few trim levels; L, Blazer, RS and Premier. Accordingly, wheels can be had in 18, 20 and even 21 inch stretches of rubber wrapped goodness. In the performance department, you can go with either a 2.5L I-4 engine with intelligent Stop/Start and nine-speed automatic transmission ( on L and Blazer) or a 3.6L V-6 with intelligent Stop/Start and nine-speed automatic transmission is available on Blazer and standard on RS and Premier. I have tried both and can say that you will be sufficiently happy either way. Chevy does not skimp when it comes to power and torque (just read my  Corvette story!).

Driving down the Pacific Coast Highway and listening to my favorite music, I was seduced into the naturalness and calm that the Blazer provides. The car was a study in finesse and accoutrements were aplenty. Having the best job in the world and getting to test drive cars all the time, I am always searching for buttons and ways to make my driving more comfortable. Inside the Blazer, the knobs, dashboard and all necessary adjustments have been thoughtfully placed and there is a truly natural ease that comes with the Blazer. It is as if you and it already know each other and you just fall into a routine that you both somehow know. 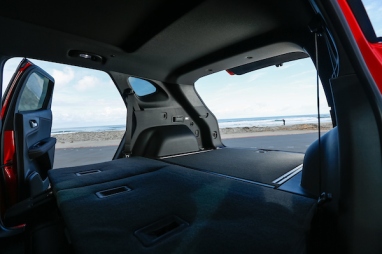 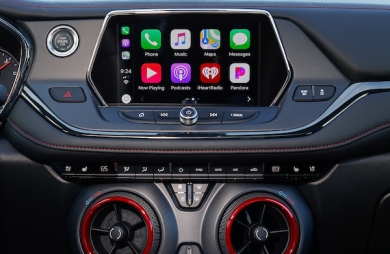 Moving further inside the Blazer, there is a whopping 64.2 cubic feet of cargo space. What does that mean exactly in real world terms? Well, it means that you and four of your friends can go on an extended road trip and pack all the unnecessary things you don’t need AND still have room to stretch out. The cabin of the car is quiet and replete in charging ports, buttons and ways to make the very longest journey seem like a Sunday fun ride. Chevrolet has really outdone themselves with the Blazer. They have single handedly created a car for the years to come. It is as if they went to the future and found a perfect example of where the SUV market needs to be and brought it back for all of us to enjoy. And enjoy I did. In fact, I think I need to come up with an excuse to get Chevy to let me borrow the Blazer again. It is just a remarkably capable and sporting car that makes any road, the one worth driving.