In anticipation of this year’s 43rd Ryder Cup in Paris, OMEGA has unveiled its Seamaster Aqua Terra “Ryder Cup” timepiece and introduced the first model during the 100th PGA Championship at Bellerive Country Club in St. Louis. OMEGA is proud to be the choice of the U.S. Ryder Cup team, and has revealed this watch in time for the competition which begins on September 28. The Ryder Cup is one of golf’s most hotly contested tournaments, with teams from both sides of the Atlantic battling it out every two years. Through OMEGA’s partnership with the PGA of America, the brand is at the heart of the Ryder Cup, and serves as the Official Timekeeper, whenever it is played on American soil. 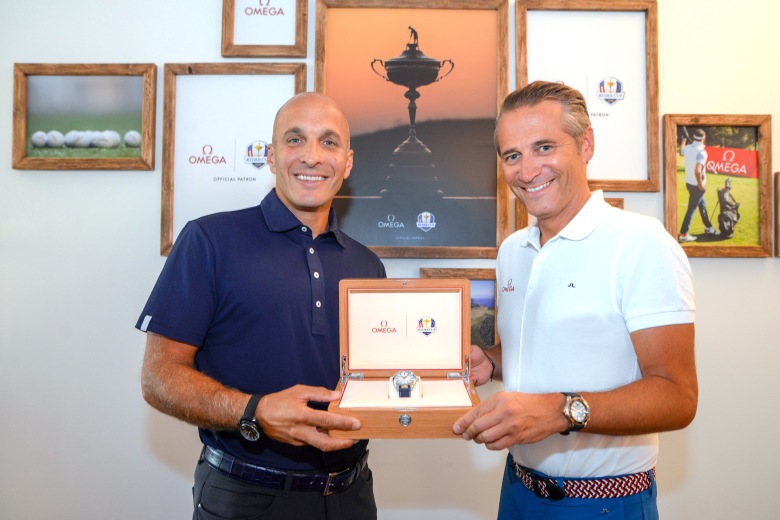 Although the event is being held in Europe this year, OMEGA remains the choice of the U.S. Ryder Cup Team, and it has created a special watch that embraces the colours of the Ryder Cup logo. As part of OMEGA’s role as Official Timekeeper of the PGA Championship, Raynald Aeschlimann, President and CEO of OMEGA, unveiled the watch to PGA of America CEO Pete Bevacqua.

“We know that the players love the Ryder Cup, so it’s a wonderful event to be associated with,” said Mr. Aeschlimann. “The watch has a colourful link to the competition’s logo, and we’re pleased to provide golf fans with a truly unique design.” The 41 mm Ryder Cup watch features a stainless steel case and houses a silvery opaline dial with horizontal stripes and a date window at six o’clock. The hour/minute hands and indexes are blued with white Super-LumiNova, while 18K yellow gold has been used for the OMEGA logo and central seconds hand. There are also small touches of red within the design, which can be found on the quarter numbers on the minutes track as well as the Seamaster wording. 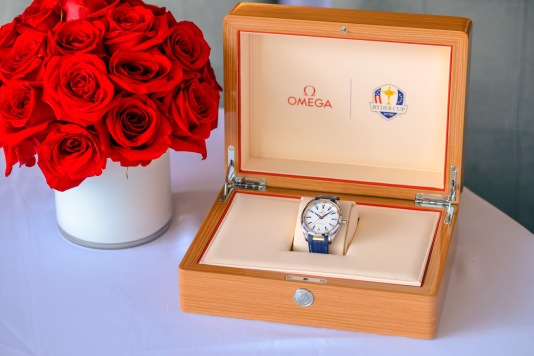 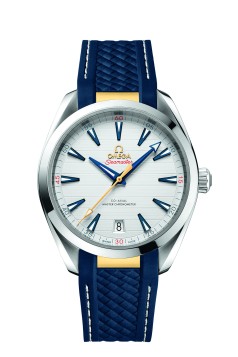 The watch is presented on a blue structured rubber strap, which is held in place by additional 18K yellow gold links. Through the sapphire crystal on the back, it’s possible to view the OMEGA Master Chronometer Calibre 8900 that powers the timepiece. The Master Chronometer status proves that the watch and its movement have reached the Swiss industry’s highest standards of precision and performances, as approved by the Swiss Federal Institute of Metrology (METAS). Finally, the caseback’s sapphire crystal is also coated with a Ryder Cup logo in 24K gold, giving wearers a special link to one of the most preeminent events in sports. Customers who purchase the watch will also receive an additional stainless steel bracelet, changing tool and customised Ryder Cup pouch.