From time immemorial, humans have shared the universal habit of looking skywards for guidance. Instinctively we all know that wherever we are in the world, the sun, our celestial clock and point of reference, rules our daily lives. Watch company URWERK devotes an entire collection of watches to our spinning journey around the sun, starting with the UR-100 GunMetal, derived from their SpaceTime models. 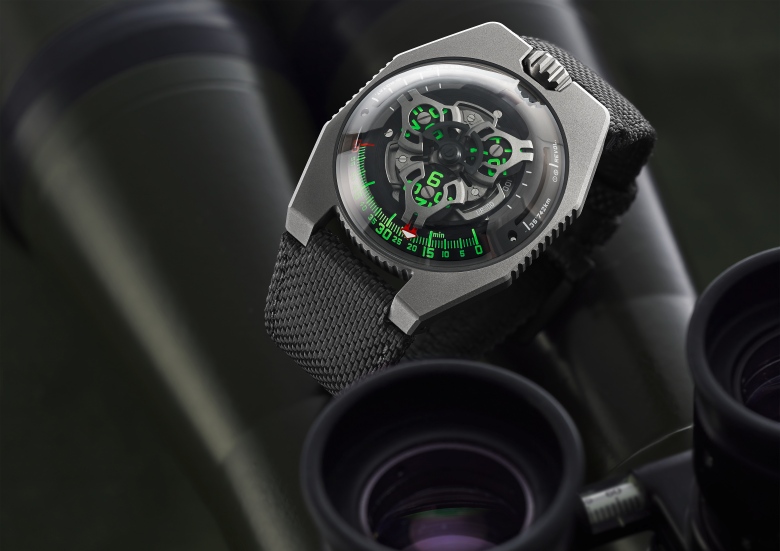 URWERK takes its name from the dawn of civilization — the 6,000-year-old city of Ur in ancient Mesopotamia. It was there that the Sumerians divided the daily track of a shadow into 12 parts, creating our basic unit of time. These first crude measures have since evolved into today’s highly sophisticated chronometers, but the principle remains the same: our days are governed by our silent spinning orbit around the sun. We passengers unwittingly travel several billions of kilometres through space every year on our rotating planet at an average speed of 30 kilometres a second.  It’s a journey displayed on the dial of the UR-100 GunMetal.

In addition to URWERK’s trademark satellite configuration of the wandering hours and minutes, the UR-100 GunMetal brings your spin through space into sharp focus. When the minutes hand has completed its 60-minute journey, it reappears on a 20-minute scale of 555 kilometres. This is the distance you travel in 20 minutes if you are standing on the equator of our rotating planet. The opposite scale tracks your journey through space around the sun: 35,740km every 20 minutes. 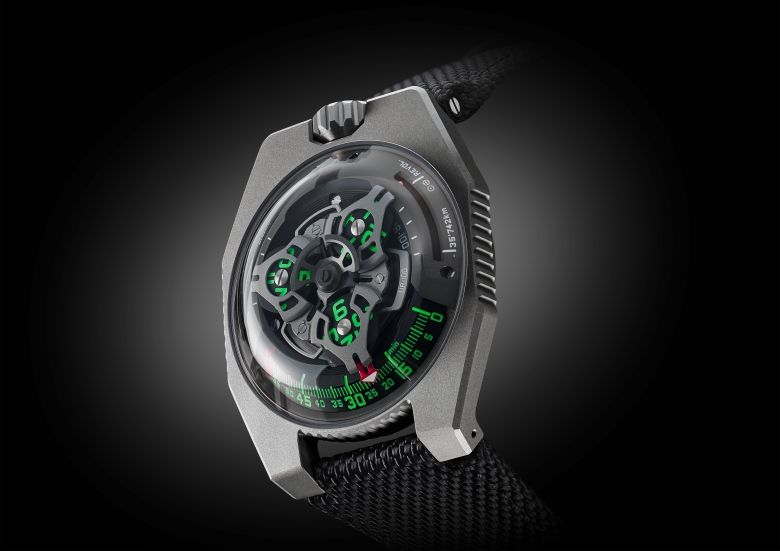 In the display on the UR-100 GunMetal, time and distance are on a par, the hours and minutes in vivid green, and the kilometres in bright white. Watchmaker and URWERK’s co-founder, Felix Baumgartner, reveals that he got the idea from a clock given to him by his father, Geri, a noted restorer of antique timepieces. “It was made by Gustave Sandoz for the Universal Exhibition of 1893. Instead of showing the time, it showed the distance travelled by a point on the equator.” URWERK’s designer and other co-founder, Martin Frei, struggled to adapt the clock’s indication to the UR-100. “The way I see it, a watch is both a physical and conceptual representation of our position on the rotating Earth. It fixes us on an exact, but ephemeral, time and longitude.”

Under the UR-100’s dome, URWERK’s calibre 12.01 movement drives the carousel carrying the hours on three satellites that travel in succession along a 60-minute scale. Each is forged from anodised aluminium then sanded and shot-blasted. The satellite screws are each circular sanded. The satellites rest on a carousel of sanded brass plated in ruthenium. The structure on top of the hours display is in sanded and shot-blasted aluminium. The bi-directional selfwinding rotor of the UR-100 is governed by a profiled airscrew known as the Windfänger.

There’s a nostalgic look about the case of the UR-100. Many owners of URWERK watches will remember the independent brand’s first models. “We have adopted some of the stylistic features of our first constructions, and then deconstructed them,” explains Martin Frei. “For example, the steel dome of our early models is now in transparent sapphire crystal. The hard outlines of the titanium case highlight its perfection. Because I’m always at odds with the dictates of symmetry, I have used different proportions to catch the eye,” he concludes.